New Moon is the second installment of the Twilight Series and with a broken heart I have to say that it was not as expected. Yes, I’ve read it without breathing but only because I wanted to search for the one thing that interested me: the relationship between Bella and Edward.

We all know what happened, they split, leaving Bella heartbroken and vulnerable. If I would want to analyze the reasons that made Edward take this decision, I would not portrait him as the bad guy. Here I am very subjective and tend to understand everything he does. But a part of me knows that he was right. His world was different that Bella’s and the incident with Jasper at her birthday party only made him realize the extend of the danger Bella is facing everyday. He loved her and that stood more alive than anything he felt. That was sacrifice in the most purely form and I admired him as a hero. The other part of me told me he was wrong. After you go through so many things with the one you love, you just don’t give up on her, even if the cause is greater than anything. You protect her, you fight for her and especially you ask her if she wants to stay by your side. You don’t take the decisions in her name. That is what Edward did and from my point of view it was not OK and lead to a lot of mess.. 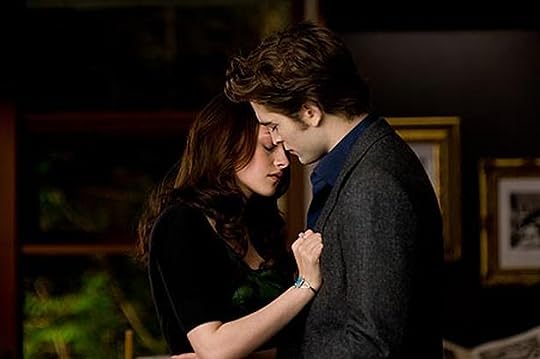 Edwards departure lead to Bella being friends with Jacob Black. We all know that he is in love with her her and in a way took advantage of her situation to win her off. I am not blaming Jacob or saying that he took advantage in an awful way. He was there for her, made her feel better and in a way healed her of the hurt she felt when Edward left. But, he knew that he could get close to her only if he is gone, because in another situation, Bella would have chosen Edward without even thinking twice.

This rivalry between Jacob and Edward was born in Twilight and evolved in a very complex thing in New Moon. They are natural enemies because of their nature, but not, with Bella in the picture, they hate each other even more. I liked the way the 2 characters are put in an antithesis: cold vs warm, calm vs anger, wisdom vs eagerness, they couldn’t have been more different. The only good thing that came from this rivalry and experience was the way Bella developed as a heroine. In the first book she was kind of weak, vulnerable and everyone had to her rescue. Now, after feeling how life is without Edward, she managed to continue living, despite her adrenaline rush and needs to see him, feel him only just a short period of time.

The book was not consistent: it started out interesting and with a strong plot, but for me, after Edward left it just became flat and boring. I was intrigued by the development of Bella and Jacob’s relationship, but not for a long period of time. I was just soooo focused on Edward returning that I could think of anything else. This inconsistency only made me classify the book in 2 parts: Before and After Edward.

The last part was the most interesting, especially the last dialogues between Bella and Edward, but all-together, it wasn’t something that was worthy of waiting 300 pages for.