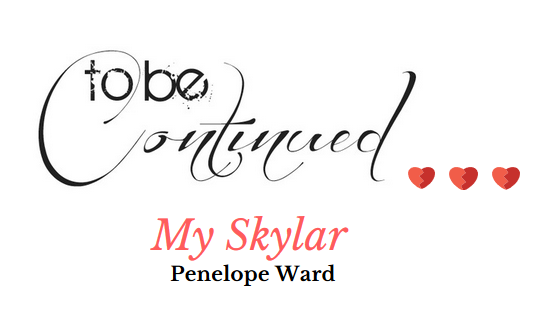 First of all, I want to say that I never had such a book hangover like this one. After reading a book that I particularly liked, I think about it a while, but after that I move on. It wasn’t the same situation with this one. I can’t seem to get over it and pick my next read, because even now my heart hurts and I constantly think about the plot and the characters. Second, why did I put My Skylar on hold for such a long time? I have absolutely no idea… With this one, I complete my list of Penelope’s book and can sincerely say that I have read all of them.  I am a helpless romantic and in this book I could find so many touching elements  that really impressed me.

Skylar and Mitch have been friends since childhood. Mitch came during one Summer vacation to stay with his grandmother. His parents were fighting a lot and the only solution to prevent him from witnessing all of that was to keep him at bay from the tension in the house.  He met Skylar and they instantly clicked. He was in need of a friend and Skylar was there for him, with her witty and straightforward attitude. The summer vacation ended and although they promised to keep in touch, 5 years passed since they’ve saw each other again, this time in high-school.

Even if Skylar was upset because Mitch didn’t call her or looked for her, they rekindled their friendship that leaded to so much more. They became friends that secretly lusted for one another and slowly, they fell in love in the most powerful way. Of course the book will be full of drama. I don’t want to spoil things, but Skylar will have to face serious obstacles and suffer a great deal, but everything up to a point was with Mitch by her side.

Let me tell you something about our couple. Skylar was something special from the beginning. She was very mature for her age and had such a sarcastic sense of humour. Her parents were divorced, but she kept in contact with both of them during the book. Mitch will be her best friend, her confident and eventually the love of her life. As I mentioned above, her path will be full of challenges, she will have to suffer a lot to gain peace and confidence. But most important, until having Mitch by her side many things will happen. She will make mistakes, she will take decisions that for you might be wrong and unjustified, but those were her choices and I respected them. Her evolution will be very surprising maybe for many of you, but this is what makes her so special to read about.

Mitch was like a superhero for me, even when there were times when I wanted to strangle him. Since being a kid, he loved Skylar. He fell hard in love with her and couldn’t forget her even when apart. Most important and the aspect that made me admire him so well was the way he was there for Skylar. He didn’t let her go one instant. There were a lot of scenes that made me cry and admire him for his loyalty and loving gestures. You could feel his love and his devotion, thing that was unmistakable and unforgettable. As Skylar, he will make mistakes that will heavily mark their relationship, but as the plot progresses, he will fight for his girl with a desperation that was palpable. I could feel his need and his desire to have her, both heart and body. This type of connection with a hero you don’t see every day and I felt to lucky to find it. I related so much to this type of relationship, because I too was sick for a while and my boyfriend stood beside me every step of the heavy journey. So in a way I was glad I could find somebody that acted the same as he did:)

Penelope Ward managed to absorb me into this book with everything she had to offer. The characters were amazing, the challenges they had to face were thought and hard to overcome. As you might be accustomed, the book will be “divided” in Then and Now, which means that Then will have you happy and by the end devastated,  and Now will leave you breathless, crying and hoping for the best. My heart beat faster in certain scenes, I cried during some paragraphs and I enjoyed immensely every page from My Skylar.

I know I am talking to much, but I can honestly say it was my favorite book of 2017 🙂 The pure emotion and intensity of this story says it all and I can believe I waited this long to read it. From the bottom of my heart I recommend this book:)