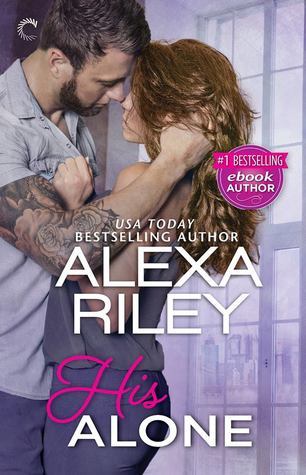 I am going to be really quick with this review, because sincerely I didn’t like the book at all.. This is my second story from Alexa Riley and if I thought Everything for Her was pushed to a certain limit, this one was over the top pushed and exaggerated..

His Alone tells the story of Ryan and Paige. Ryan is Miles, Paige’s brother, chief of security and the person he trusts most. At the end of Everything for Her we figure out that Ryan has been working in secret for Paige’s and Milles father, who happens to be their enemy. I knew there has to be an explanation to this, because I could see Ryan in a lot of situations, but not as a traitor. He has been fighting with his love for Paige for years and his only goal was to protect her from her enemies, as her father. He kept aside everything he ever felt for her and only focused on keeping her safe. He wanted to come clean in a certain moment when he was convinced that Paige will understand his motives for keeping the truth from her and they could finally be together without any secrets.

Paige on the other hand, also had a hidden agenda. She was after her father, wanting him dead for what he did to her mother. Now that Miles had Mallory, he step aside in this revenge plans, and considered she was the only one who can avenge her. This plans will afect their relationship and will keep Paige at a safe distance from Ryan, because from her point of view, once he will discover her true intentions, he will no longer love her. Of course their attraction will be off the charts and they will give in to their feelings.

From this point on, a huge and silly drama will occur, that I have to warn you was not of my liking. I wanted to read this book to see if Alexa Riley will continue with the pushed style.. I mean, everything was not realistic, and everything was rushed. I know Ryan loved Paige for years and couldn’t wait for a lot of things, but it didn’t feel ok to me. The situation in which the characters were put didn’t made me feel anything, I just smiled here and then, but they didn’t resonate with me. Everything seemed artificial and I just waited to something noticeable to happen, but it didn’t. At the end of the book, I was like : ” That’s it??” and I don’t like addressing that question often.

The romantic/ sex scenes were average, without that hot element that makes your body be aware of them.. I just read them, but neah, nothing happened.. In the end let’s just say that this book was a sex/revenge story without any important things going on. And oh, if there was something important happening that marked the characters, it was easily thrown aside and never talked about it anymore….

Not even comparing Ryan to Captain America didn’t do a thing for me, and believe me, I have it huge for Chris Evans:)