My first Mafia Romance was “By Any Other Name”. I loved every minute of it, and even if it didn’t have soft and fluffy love, it had this mix of passion, violence and love which for me was a discovery. I don’t have a very rich culture in this type of books, but I believe Darhower’s books are the best:) The action is breathtaking, the heroes are amazingly crafted and the heroines kick ass:)

“Menace” is the first book in the Scarlet Scars series and I love it deeply, 80% of my feelings being generated by the characters. Darhower’s style is intriguing and the fact that you acknowledge the characters as being completely crazy but still love them to bits it’s something to think about 🙂

Lorenzo “Scar” Gambini is the hero of this story, a very particular character to say the least. Others see him as cold, calculated, a criminal with no heart and feelings, but apparently he is only bored. He is waiting for somebody to make him feel alive, to make him feel something, but nobody crossed his path.. He owns different business, he does weapons and alcohol traffic, the kills without blinking, but he never fell in love. He believes he doesn’t have it in him to wake those feelings inside, but as you know it by now, never say never:) 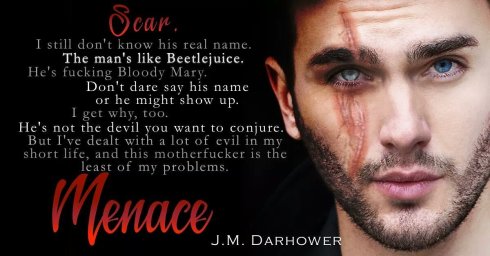 Morgan will be the one to ignite something in him, something that is not very gentle at the beginning, but their similarities will make her and Lorenzo spend a lot of time together. She is running from her past, hiding from something, but in the same time, she is willing to do anything to recover something that was hers. She is willing to sell her body, her soul, to bring it back and as time passes, she realizes Lorenzo might help her in the proces. She is feisty, stubborn and not afraid to conform Lorenzo and give him her piece of mind. She can’t be controlled and I liked that about her. Even if sometimes I thought that she needs to be more human, considering the events she went through, it can be understandable.

Their relationship can be defined only by “crazy”. They are 2 similar personalities that are drawn together by some invisible force called attraction. Even if at the beginning they fight a lot (psychically even), they have this weird fetish of transforming anger in passion, which leads to a lot of sex scenes. Their dialogues are hilarious and so intelligent, and I think I called them crazy hundreds of times, but still love them so. This is a slow burn love story, coming from 2 complicated characters that don’t believe they have it in them to love. They will be consumed by passion, anger, hate and revenge, but everything will come around and prove them wrong. They will become a great time and I loved their dynamics.

The amazing story and characters are mixed with a awesome plot, intelligent and breathtaking. There are some chapters that really messed with my head, making me believe other things and after that scrambling all my scenarios. You literally change your whole perspective at the last word of the book. Totally recommend it and as we speak I begin book 2:)