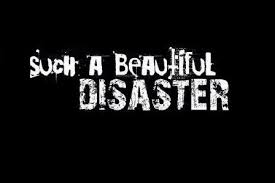 Jamie McGuire is pretty awesome in her attempt to create a super series with gorgeous guys, that have explosive personalities and amazing seduction skills. This was my first Romance book and ever since reading it, I was hooker to this genre and began exploring it.

First in line is Travis Maddox and I have to say before I begin the review, that he is not my favorite from the series, but he has some distinct trademarks that girls tend to go crazy about:)) “Beautiful Disaster” describes pretty much the relationship between Travis and Abby and how intense they are together. Opposites attract and in this case, they fire up the roof with their passion and chemistry. First was a very sweet friendship that developed into something more, something consuming and not avoidable, even if Abby was keen of keeping a distance with bad boy Travis, because the least she wanted was complicated.

Abby was very straight forward and kind of immune to Travis charms. She doesn’t need trouble in her life and wants to hang out with her friend, focus on her studies and not fall in love. Travis has opposite goals and a reverse personality than Abby’s and I was very shocked about the difference between the two of them. Travis is a force of nature, a fighter by day and also by night, with an explosive personality and an obsession for Abby. The thing that made me rate this book with 4 stars was his impeding obsession for her and his reactions that were sometimes too much for me to handle. He was unpredictable and I didn’t know what he was going to do the next second. Maybe I like calmer boys and I don’t want to say that fighting for the things you want is a bad thing. NOOO!! I like and swoon so much over boys that act like this, but Travis was a little too immature for my liking and sometimes I wanted to tell him to grow up and win Abby over using a softer style.

The plot is interesting and beginning with “Beautiful Disaster” all the stories will be connected. Events tend to be more dynamic towards the end of the book and the relationship between Travis and Abby will change, leaving room for drama, intensity but also steamy scenes. This book is from Abby perspective but don’t worry, “Walking Disaster” is just around the corner, from Travis POV, for you to get to know him better.