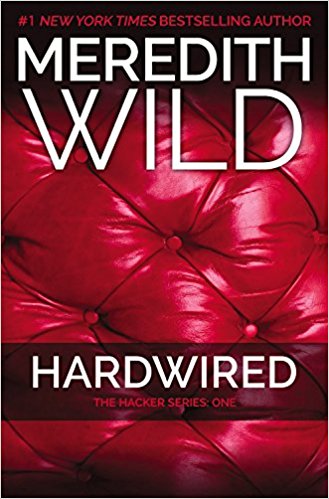 I’ve heard so many things about Meredith Wild and the “Hacker” series that it was a must for me to read it a.s.a.p. Being an international best seller author means so much professionally that you know the book is going to rock your world. Buuuuuut.. it did and it didn’t.. mixed feelings about it.. I’ve only read the first book and maybe better things are to come for this one.

So, “Hardwired” is the first book from the series and tells us the story of Erica and Blake, two very different people that meet and connect instantly, the attraction being unbearable. Erica just graduated and all her life she wanted to do something notable, to excel. She developed together with some friends a fashion application and needs funding, so that the app could develop and see her dream become reality. She finally catches the attention of a big investment company and gets the deal she dreamed of. As part of the evaluation committee, Blake Landon is watching her very attentive, being bewitched by her brains but also beauty. He will begin his hunt, wanting to make her his. From this point on, Blake and Erica will embark on a very intense and hot relationship, with a lot of secrets and ups and downs.

The best thing about this book is Blake.. I liked him, even the name was extremely appealing, I loved it from the first second I’ve read it 🙂 In his teens he was a hacker, now having an empire in business and technology. He has a past, but in the first book he keeps it very well hidden and only gives us glimpse and pieces of his activities and issues. He manages control very well, almost too well, but in his intimacy with Erica we could see a “dark” side of his, which was kind of hot if you ask me:)) He is extremely stubborn and possessive, the kind of alfa man that no one can forget. His perseverance is outstanding and he will use all his resources to have Erica in his life, even if he has to force her to realize what is good for her.

Erica was very complicated and partially to blame for my rating. She mega annoyed me and I couldn’t understand her half the plot. She suffered tremendously in her life and now, her dream is about to become reality. She invested so much heart and effort in this project and she doesn’t want anybody to stand in her way, not even an electric attraction for a stunning man. She confused me much because her demeanor changed a lot.. one moment she was fighting Blake, the next she was kissing him and her duality in action was not my type. Her sensitivity was also a great and delicate subject because she kept on being mad on everybody for various reasons which I couldn’t connect with. Drama, drama and more drama. 🙂

The plot was not something BIG, reveling and extremely complicated, it was kind of flat, and even if it was more dynamic through the end, it didn’t deliver thriller or drama.. it was very bearable, without any substance… Don’t get me wrong, I’ve read worst, but this was not something to make me think about it after finishing it. Will I read the second book? I think so… I will give it one more chance and if that one is not OK also, I will leave the series to other readers that might enjoy it better than me.